Around August 2017 I signed up to People.io, a smartphone app that sent you quick and easy surveys every day, the odd video to watch and paid out in a number of ways, including Amazon and Argos vouchers. This is an open letter to the creators.

The views expressed in this blog post are mine alone, and do not necessarily represent the view of the rest of the GPT Genies team.

Throughout the post I have included screenshots of just some of the complaints about this app in the GPT Genies Facebook group.

If you’re a people.io user who’s as bothered as me by the way we’ve been treated, read to the end to see how you can help spread the word. 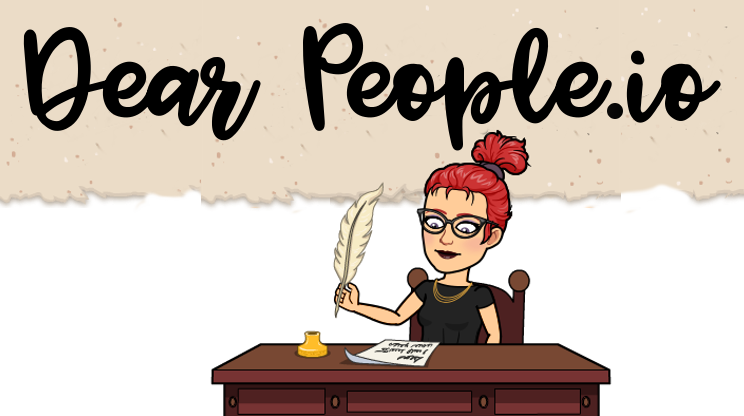 It started off so well. I heard mutterings around the forums I am in that a great new app was around that was not only easy and quick to respond to, but was also interesting and fun, and had a great payout rate.

Already using a plethora of survey type apps, the great reviews made me ready to give people.io a try, and I duly downloaded the app to my Android phone.

And things were good. The questions were good, the video ads were interesting, the app worked well, and checking out the marketplace, I could see that it wouldn’t take me long to reach my first five pounds.

But, as it is with life, real work took off, I didn’t always have the time to check in, so it took longer than expected to reach the 1500 points needed for that first cashout. In the meantime, this wonderful new app was being promoted all over the Facebook groups I was in, with people saying they had cashed out and received their payments.

So I took a chance – I decided to recommend your app to my GPT Genies Facebook group – a group that currently has over 9000 members, all of whom belong to GPT sites and / or apps in the UK. A great source of new members for you, I have no doubt. People signed up and they loved your app as much as I did. They in turn encouraged others to join up, and they did, in their droves.

By October I had enough points to cash out, and visited the marketplace section only to find that it had been removed. Looking online I saw numerous others complaining too that they couldn’t cash out. 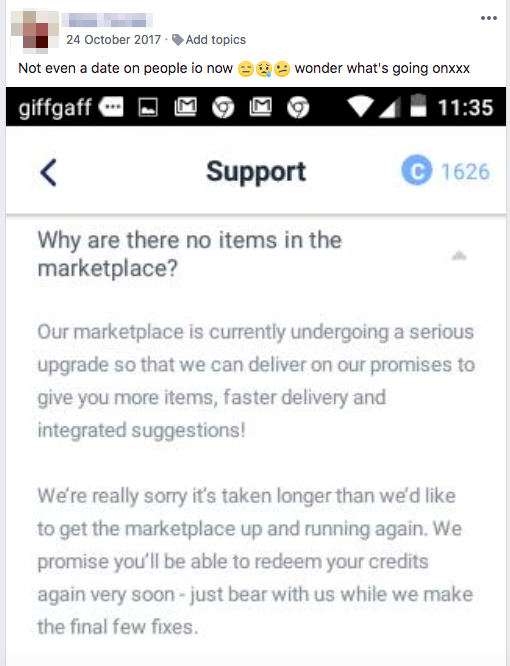 Murmurings started in our Facebook group, people were complaining, saying you were scam artists. In my naivety I stuck up for you. I defended your app, and in turn your development team, and kept my group informed as to progress.

I say informed of progress, but most of the time all I could pass on to thousands of people were rumours that I heard, things that others had said – there was no way of giving people the ‘official line’ as there was none. You guys stayed extremely quiet about the whole thing.

Eventually you released a statement saying that the marketplace would be back ”soon” – needless to say, this did not placate the users in my group, or in many other groups around Facebook. 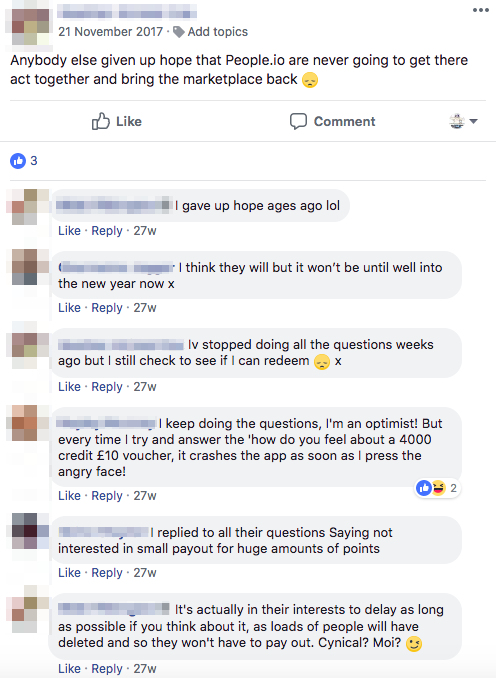 But yet again I defended you, telling all of those people I could that we should give you the benefit of the doubt, that if you were going out of business then the app wouldn’t still be available for download, you wouldn’t still be sending us surveys to do. 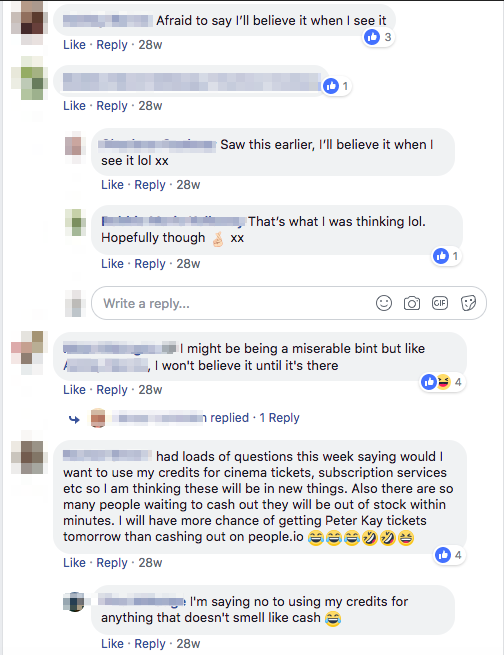 Because you were – sending us surveys to do that is – every single day. Taking our data, no doubt selling that data on and using it to make money for your company. 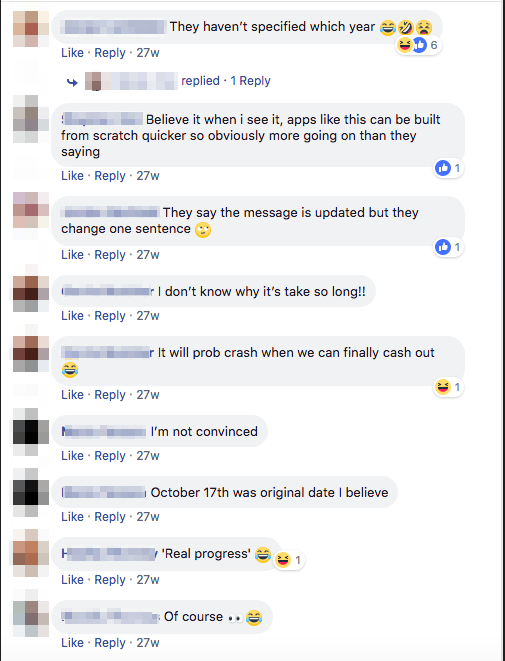 The problem is that in a group of 9000 people using GPT sites and apps, people aren’t stupid. They know you’re making money from their data, even if they’re not sure exactly how. And the savvier people are using multiple sites and apps to get paid for giving their data and opinions, so they’re not going to stay quiet if they feel they’re being ripped off. 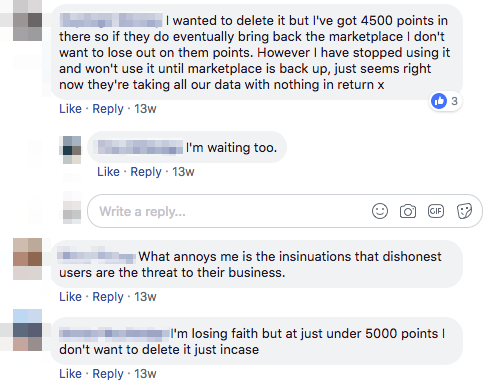 Eventually you released a statement saying the marketplace would be ready by Christmas. There were a lot of grumbles, but some people were placated. Some people deleted the app and cut their losses, others had enough points that they decided to stick with it in the hope that what you were saying was true. 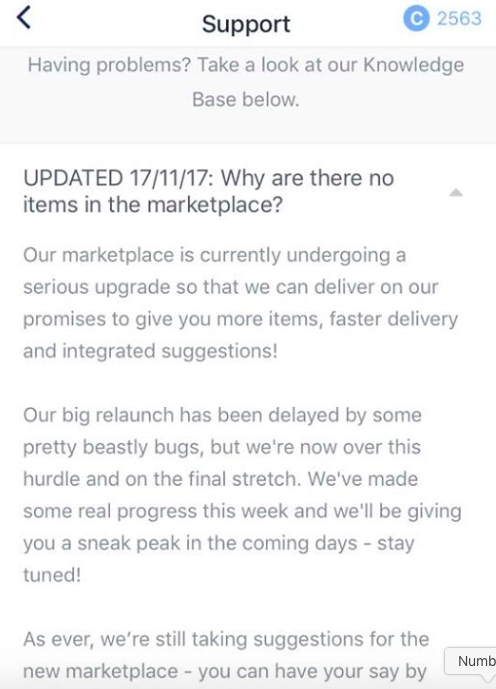 Christmas 2017 came and went – no marketplace. As did January, February, March and April. Every so often people would pop up in my group and have a moan, there’d be a long discussion, more people would delete the app, and your reputation took another nosedive as yet another vacuous video was posted in your app saying you were ‘doing your best’. And still no marketplace.

Mid May yet another promise, yet another predicted date for the launch of the new marketplace. By this time I’d given up on you too. I didn’t delete the app, but I refused to give you more data I wasn’t going to be paid for, and I didn’t truly believe that the fabled marketplace would materialise. The end of May you said, but as I said to my group, I wasn’t going to hold my breath. 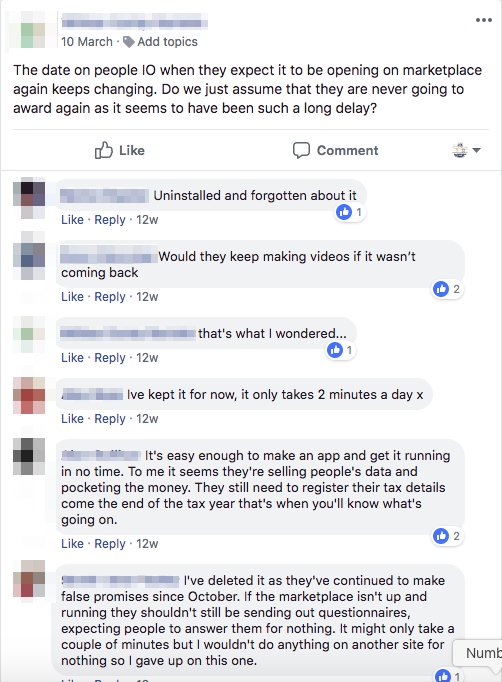 And so it came, the end of May. The very last day of May. And to everyone’s surprise, the new marketplace was live! 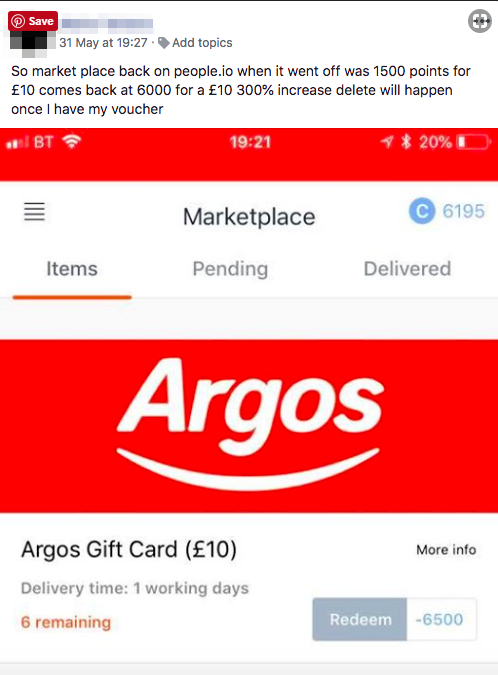 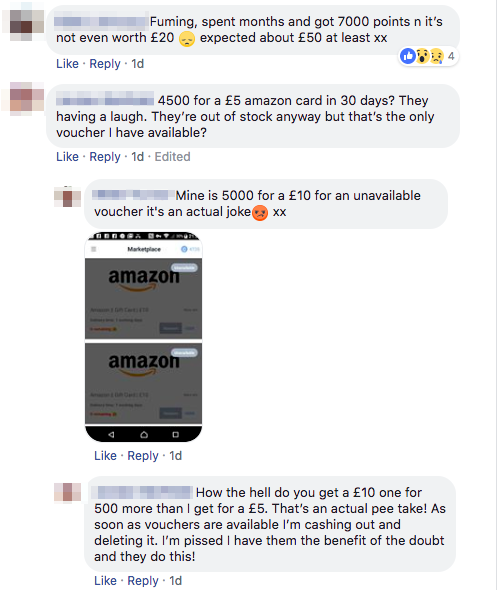 I asked people to wait, said it could be teething problems, still ready to give you the benefit of the doubt and help my group members to avoid feeling they been ripped off. After all, I was the one who had recommended you, if you then turned out to be taking the proverbial, I looked as stupid as you.

Then the email arrived. You do remember the email don’t you? Then one that basically told the userbase that the majority of them were liars and that’s why they had to use more points to get lower rewards. I’m not sure if you have a marketing department, but as a marketeer for over 25 years, I’d say sack them if you do because they know nothing about marketing and brand reputation / revival. (Seriously, sack them, that email did more to wreck your reputation than anything else you’ve done). 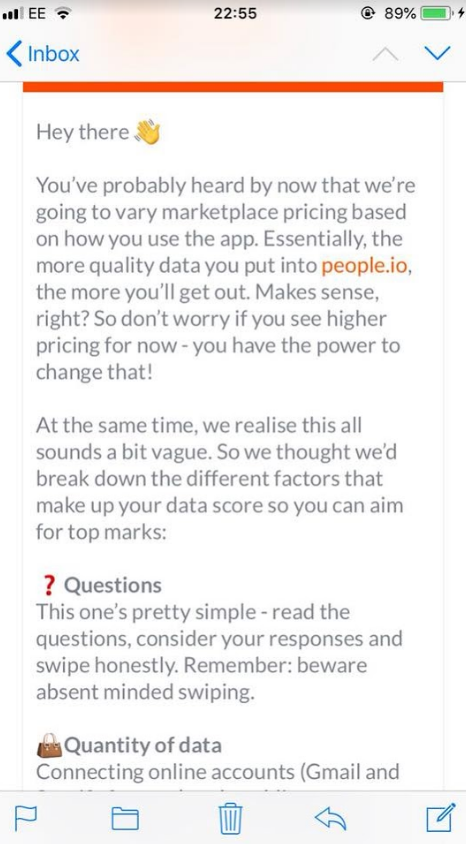 So, you’ve managed to piss off your user base for months, but at least the new marketplace is up, yeah? Ummm no. Because no sooner than the marketplace was live, none of the actual rewards were available. Not even the signed photo of Pete (please tell me who’s idea that was and why they hate Pete so much? I guess at least it provided some amusement in the whole sorry débâcle). 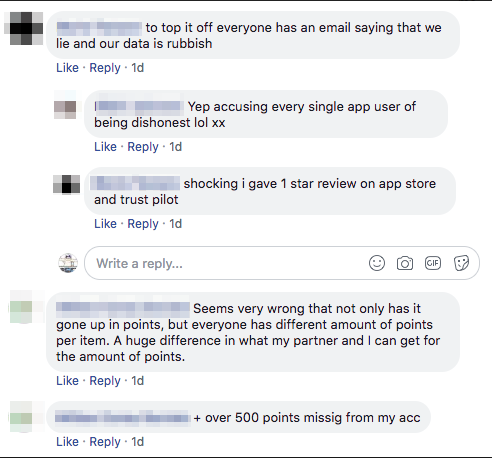 So for our patience and data, what could we actually get? Some crappy email signups that we can get anywhere else for free? Who’s great idea was that?

The bottom line people.io is that you’ve messed everyone around for months, taken the biscuit on every occasion and then topped it off with some of the most idiotic marketing I’ve ever seen.

Not only have you made yourselves look stupid and like scam artists, you’ve made people like me look stupid for recommending you.

In addition you’ve created more work for Facebook group admins such as me. I’ve had to moderate comments and posts, spend time explaining to people what is or isn’t going on, read their complaints and more. I’ve had to watch every one of your videos even though they all basically said the same thing, in the hope that they have some good news I could believe. So not only did I not get paid for my months of data,  or for recommending your app to thousands of people, you actually created work for me that I also don’t get paid for.

I don’t know if you can recover from this to be honest – your app store and trustpilot ratings are through the floor and your reputation is lower than I’ve seen any GPT app go. I’m surprised Pete ever leaves his house, let alone posts videos on the internet…

Can you fix it? I’m not sure, but if you’re going to then you need a decent team around you and people on board who know about reputation management – I don’t think you have that team right now.

I don’t have the answers for you, especially not for free, but the next couple of weeks will be critical and if the comments of the people in my group (some of which I’ve shared on this post) are anything to go by, it will be an uphill struggle.

I’m sure you’re all nice people and had the best interests at heart, but unfortunately for you and your thousands of users, this time you fell short.

I’d like to see how you’re going to make that up to your users, but again, I won’t hold my breath.

Send them a link via their official Facebook Page.

Come join our Facebook group and discuss it there. Make sure the word is spread about how ripped off you feel. Use the hashtag #nonopeopleio so we can keep track. Maybe they’ll listen and give us what we actually signed up for, sometimes miracles DO happen.