*** Update – after a quick email discussion and a couple of suggestions, Pollpass have now put a message on the deactivated screen to tell people to email support to get their accounts reactivated, making it much easier all round. Nice one guys! ***

Over the last few days more and more people from our Facebook group (including me) have been finding that when trying to log in to Pollpass, their accounts have been deactivated.

Pollpass isn’t a huge earner, but it’s an easy site/app to use and only takes a few minutes every couple of days – you can read more about it here. 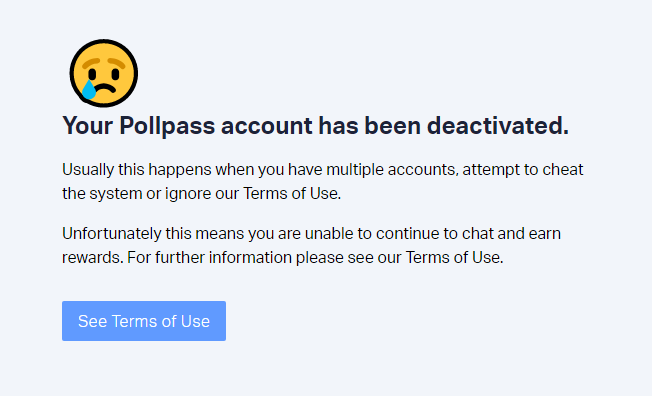 As you can see from the image above, there is no explicit reason given for this, no explanation other than a link to the terms and conditions. Sadly, even once people have read the T&C, they’re still no wiser as to why they have been banned. I read the T&C twice, just to be sure.

But the simple answer is that they (and me, and probably you if you’re reading this) have done absolutely nothing wrong at all.

I contacted the guys at Pollpass to find out what was going on, and owner Tony told me this:

Due to the recent GDPR legislation, Pollpass have had to change their T&C, and legally you can’t access the site until you have agreed to the new ones.

Because of the way in which the chatbot works, it apparently isn’t possible to do what most of the other apps and sites do, which is to let you log in and then ask you to agree to the new terms before you can go any further.

So Pollpass felt that the only thing they could do was log everyone out and temporarily deactivate all accounts that were formed before the changes happened.

But fear not – you can get your account back!

All you have to do is email support@pollpass.com and tell them that you agree to their new T&C – they will then reactivate your account within a couple of days.

It’s a pain, and I’ll be honest and say I definitely think there were better ways to deal with it than this, but if you like Pollpass and want your account back, that’s the way to go.

Were you deactivated? Are you going to get your account back? Come and let us know in the Facebook group!