It’s the 20th anniversary of 9/11. Read about the day and get a Swagbucks search win while you’re learning. 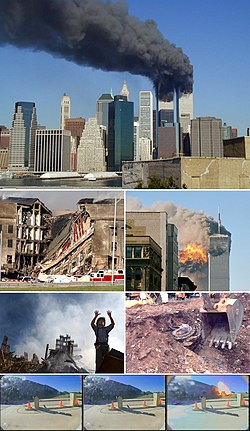 On the 11th September 2001, at 8.46am local time, 13.46 BST, the world stood still and watched, as America suffered one of the worst terrorist attacks the world had ever seen. 4 aeroplanes were hijacked. Two of the planes hit the twin towers in New York City.  Another hit the Pentagon, just outside Washington D.C, and the last one crashed into a field in Pennsylvania because of some very brave people.

It was a clear, beautiful, Tuesday morning, people had gone about their lives as normal, many at work. On any given day 30,000-50,000 people worked in the World Trade Center, with many, many more passing through the buildings on their commute. Then at 8:46am the first plane crashed into the 80th floor, of the North tower, of the World Trade Center in New York City trapping hundreds in higher floors. Originally thought to be an accident, evacuations started of the tower and its twin, but 17 minutes after the first plane, came the second. It hit the south tower, around the 60th floor. That place caused an explosion as well. America soon realised it was under attack.

While millions of people had their eyes on New York City, and the sad events unfolding there, yet another plane was this time heading for the Pentagon. It hit at 9.37am.

At 9.58am, the horror in New York turned into catastrophe, when the south tower suddenly collapsed. 29 minutes later, the north building of the twin towers also fell.

When the North Tower fell, debris fell on the nearby 7 World Trade Center building, which damaged the building and started some fires. These fires burnt for many hours, compromising the building’s structure, and 7 WTC also collapsed in the end, at 17.21.

The last plane was hijacked a little while after leaving New Jersey. The plane had been delayed, so the passengers had already heard what had happened in New York and Washington. Some of the passengers and crew decided to do something and fought the hijackers. As a result the plane ended up crashing in a field at 10.03am instead of its intended target which, to this day, no one knows for sure what that 4th target was supposed to be.

In total 2,983 people died in the 9/11 attacks, not including the hijackers. Excluding the hijackers, citizens from 77 countries died that day in New York, Washington D.C, and Pennsylvania. At the World Trade Center alone, 2,763 died, including 343 firefighters and paramedics, 23 NYC police, and 37 Port authority Police who were trying to evacuate the buildings and save people from higher floors. At the Pentagon 189 people were killed and 44 were killed when the plane crash-landed in Pennsylvania.

Every year, people remember this atrocity, and the 2,983 lives that were lost, in the hope something like this, will never happen again. It remains the deadliest terrorist attack in human history and the single deadliest incident for firefighters and law enforcement officers in the history of the United States.

Since 9/11 everything has changed, nothing has been the same again. So much grief and sadness was felt that day.

We must never forget!

Many thanks to GPT Genies Facebook Group moderator, Helena, for writing this post about the 20th anniversary of 9/11. If you are not already a Swagbucks member, please consider using Helena’s referral link as a thank you 🙂